Athens is among the top 25 Travelers’ Choice Destinations announced this week by travel site TripAdvisor.

Athens ranked 20th on the 2015 Travelers’ Choice awards for Destinations. 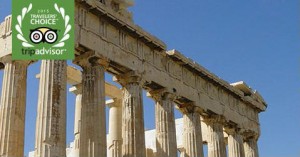 On the Greek capital, Tripadvisor notes:

“Thanks to fortunes brought by the 2004 Summer Olympics, Athens has become a city reformed. Spotless parks and streets, an ultra-modern subway, new freeways, an accessible airport and clear signage make the city easily negotiable. Meriting more than a stopover en route to the islands, sophisticated sites in this Travelers’ Choice Destination include many pillars of Western history, from the Acropolis to the Temple of Olympian Zeus, as well as treasures in the National Archaeological Museum.”

Award winners were determined using an algorithm that took into account the quantity and quality of reviews and ratings for hotels, restaurants and attractions in destinations worldwide, gathered over a 12-month period.

“These world-class destinations chosen by our community are rich in history, culture and beauty and offer endless sights to explore,” said Barbara Messing, chief marketing officer for TripAdvisor.

Greek Travel Bloggers to Spread the Word About Hersonissos, Crete