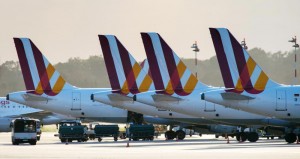 Germanwings’ Airbus A320 aircraft operating flight 4U 9525 from Barcelona to Düsseldorf and carrying some 150 people crashed Tuesday in a remote section of the French Alps. Low cost airline Germanwings is owned by Lufthansa.

According to the latest updates by French officials, all aboard are feared dead. Passengers included 45 Spanish and 67 German nationals, 16 German high school students and their two teachers, two pilots and four flight crew.

According to The Guardian, the aircraft reached its cruising height of 38,000ft at 10.45am, 44 minutes into the flight, and began the descent just a minute or two later. Contact was lost at 10.53am when the plane was at 6,000ft.

Initial reports said the Airbus A320 sent a distress signal at 9.47am GMT before vanishing off radar. However, French authorities later said this was not the case.

Members of the families of the passengers involved can obtain personal information by calling the toll-free hotline on 00800 11 33 55 77 (available in Germany, Austria, Switzerland and Luxemburg). General number (toll) +1 407 362 0632.

“Everyone at Germanwings and Lufthansa is deeply shocked and saddened by these events. Our thoughts and prayers are with the families and friends of the passengers and the crew members”, Lufthansa said in a press release.

On its website, Germanwings said it is conducting a full investigation on the accident.

The aircraft involved in the accident was delivered to Lufthansa from the production line in 1991, according to a press release by Airbus. The aircraft had accumulated approximately 58,300 flight hours in some 46,700 flights.

“In line with ICAO annex 13, an Airbus go-team of technical advisors will be dispatched to provide full assistance to French BEA in charge of the investigation”, Airbus noted.

“The concerns and sympathy of the Airbus employees go to the families, friends and loved ones affected by the accident of Flight 4U9525”.

Following the crash Germanwings and Lufthansa have blackened their logos.

Germanwings A320 Goes Down in French Alps