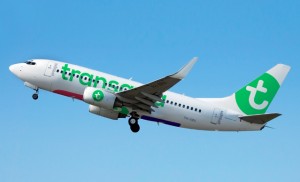 New brand identity: Transavia has a restyled logo on the fin and an enlarged brand name in the carrier’s traditional green, on a white fuselage. The basis of the new message that Transavia aims to communicate is: “It’s a pleasure”. Photo: Studio Dumbar

Accessibility, affordability and hospitality are the pillars of Transavia’s latest rebranding and expansion policy, which includes a restyled logo designed by Dutch agency Studio Dumbar and digital marketeers Mirabeau, online efficiency and profitability as of 2017, the company said on Wednesday.

Aiming to become the “most affordable and accessible airline company in Europe”, Transavia’s goal is to serve 10 million leisure and business passengers annually.

“In the long term, we want to expand our business to serve 10 million passengers per year and generate an annual turnover of 1 billion euros. This means expanding our fleet to include a total of 40 airplanes, as that is what we will need in order to maintain our number one position as a point-to-point airline company in Europe. And if you also take into account our ambitions for Transavia in France, we should be able to double those numbers,” the carrier’s managing director and chairman, Mattijs ten Brink, said.

The low-cost airline, which works closely with tour operators, plans to develop new products and become profitable starting in 2017.

Established half a century ago, Transavia is a Dutch based low-cost airline, an independent part of the Air France-KLM group, with its main base at Amsterdam Airport Schiphol. It currently serves 88 destinations via its 36 carriers.

Transavia is represented in Greece by Galant Hellas.