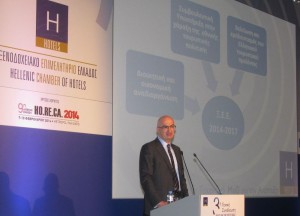 The Hellenic Chamber of Hotels will release a report that sheds light on the issue of the sharing economy during its 4th General Assembly scheduled to take place on February 6 at the Metropolitan Expo exhibition center during the 10th HORECA trade show.

The report explores the sharing economy and its effects on Greek tourism and identifies possible solutions to lost revenue resulting from illegal leasing practices.

During the annual general assembly, the chamber will go over its finances and actions of the previous year and present data on the latest performance of Greek hotels.

The chamber will also brief its members on the recently finalized hotel rating system. According to the new classification scheme, hotels will be ranked on a scale of 1 to 5 stars and/or keys.

Moreover, Greek hoteliers will be given an update on the developments and problems of the country’s tourism and economy and also gain insight on the trends and progress of the international tourism market.

The chamber’s president, Yiorgos Tsakiris, stated at last year’s assembly that tourism is the main economic activity of Greece, as well as the main source of employment. His statement is expected to be a reference point at this year’s event as well.

The hotel chamber’s general assembly is titled this year “Tourism: A Steady Force” and will take place in room C1 of the Metropolitan Expo at 5pm.

Greek Hoteliers Get Ready for ‘100% Hotel Show’ in Athens