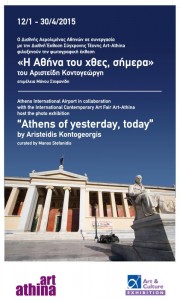 Athens International Airport (AIA) is teaming up with the Art-Athina International Exhibition of Contemporary Art to host six special exhibitions throughout the year.

The “Art and Environment” exhibition area, located at the airport’s Departures Level, will host three thematic displays that shed light on the city of Athens and contemporary art in public spaces.

“Athens of yesterday, today” is the title of the first exhibition which presents selected photographs of statues located in Athens through the highly humorous lens of distinguished photographer Aristeidis Kontogeorgis. Shot from various angles and under different lighting conditions, the photographs of Kontogeorgis capture the city without idealization and reflect the way in which the city cohabits with its past as well as its present. The exhibition’s curator is professor Manos Stefanidis. (Duration: January 12 – April 30, free 24-hour access for passengers and visitors)

In addition, the “Art and Culture” exhibition area, located in the airport’s Arrivals Level will host three “Travel” exhibitions of renowned artists.

The thematic exhibition will kick off with Jenny Marketou’s “Stolen Bubbles”. Curated by Artemis Potamianou, this is an animation project that attempts to re-approach and reinterpret Karel Zeman’s classic film The Stolen Airship (1966).

In the original film, an “airship” flying over Prague, around the turn of the 20th century, attracts the attention of the locals who gather in the streets to admire it, while even the statues on Charles Bridge seem to point at the strange machine. (Duration: January 12 – April 30; free 24-hour access for passengers and visitors)

The Art-Athina International Exhibition of Contemporary Art is celebrating its 20th anniversary this year.

Let’s Do the Swing… at Athens International Airport