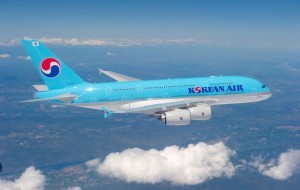 Korean Air, the biggest airline company in South Korea and one of the most important in Asia, has signed a codeshare agreement with GOL Linhas Aereas Inteligentes, the largest low-cost airline in Latin America.

“It is our tenth codeshare agreement and the first with a company in the Far East. For sure this partnership, when approved, will provide more convenience to passengers that have to do connections to all destinations served by GOL, especially in Brazil”, says Ciro Camargo, Alliances manager at GOL.

With this partnership Korean Air will include its code on GOL-operated flights giving its customers a greater number of connections for destinations in Brazil and America. Korean Air currently has codeshare partnerships with 29 airlines on 188 routes worldwide.

The companies also entered into an agreement related to the Frequent Flyer Program, which will allow the members of their loyalty programs, Gol’s Smiles and Korean’s Skypass, the possibility to accumulate and redeem miles in all eligible flights operated by the two companies.