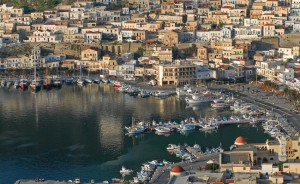 Kalymnos, the fourth largest island in the Dodecanese complex in south-eastern Aegean and situated between Kos and Leros, will participate in TBEX 2014, scheduled to take place in Athens this October.

TBEX Europe is the largest and most popular annual meeting of the international community of travel bloggers and travel media writers and will be held 23-25 October at the Megaron Athens International Conference Center.

According to an announcement, the Municipality of Kalymnos has accepted to sponsor a TBEX event at the Megaron and will distribute some 1,200 small sponges to foreign delegates. 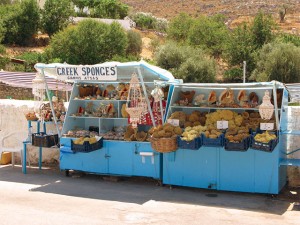 Kiosks filled with sponges and shells are everywhere on Kalymnos.

Kalymnos is a Greek island, best known as home of the world’s finest sponge divers. The sponge fishing trade has shaped the island’s entire culture, something that is apparent almost everywhere on the island.

TBEX Europe gathers approximately 1,000 tourism reporters, bloggers, writers, content creators/contributors as well as professionals from the tourism market with activity in social media, from throughout the world. It is a three-day event, during which a series of meetings, educational seminars and presentations will take place with the participation of internationally renowned experts, social media influencers and celebrities. The event is accompanied by a rich program of social events and activities that showcase the host destination.

The selection of Athens as the host city for the event is an important development for the position and the image of the city but also for Greece in general in the international travel and tourism industry.

The event will be organized by the Municipality of Athens, the Athens Development and Destination Management Agency (ADDMA), the Athens Convention and Visitors Bureau (ACVB) and with the support of the Tourism Ministry and the Greek National Tourism Organization (GNTO).

Amphipolis: Not The Burial Site Of Alexander the Great