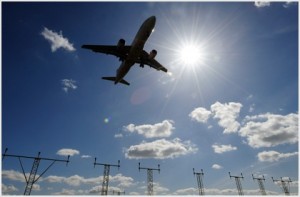 European and American airlines are canceling flights to Tel Aviv, Israel, following a security alert after a rocket landed one mile away from the country’s main airport on Tuesday 22 July.

According to reports, Air France, Germany’s Lufthansa (including subsidiaries Swiss, Austrian Airlines and Germanwings), the Netherlands’ KLM, Italy’s Alitalia, Turkish Airlines and the UK’s easyJet were among the airlines which decided to suspend flights.

Greek carrier Aegean Airlines canceled a flight to Tel Aviv on the morning of Wednesday 23 July.

British Airways will continue flights, reports mentioned. “We are closely monitoring the situation. Our flights are currently operating as scheduled.” British Airways said on Twitter. The airline has two flights from London to Tel Aviv each day.

Air Canada also announced it would cancel its Toronto-Tel Aviv flight on Tuesday evening and the return flight on Wednesday 23 July.

The airlines are suspending flights to Israel’s main airport just days after Malaysia Airlines Flight 17 went down in eastern Ukraine.