Greece’s main tourism body has voiced concern over a European directive that limits subsidies and tax breaks for tourism investments.

The president of the Association of Greek Tourism Enterprises (SETE), Andreas Andreadis, informed Greek journalists on 23 July that the EU Directive 651 on competition contains restrictions and limitations on the provision of investment subsidies for tourism purposes.

Mr. Andreadis stressed that without incentives, businesses would be discouraged to launch new tourism investments or even modernize existing hotel resorts. 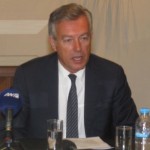 SETE’s 2014 arrival forecast for Greece has risen to 19.5 million arrivals, which was originally the association’s target for 2018. According to SETE, if the figure is achieved this year and the association is three years ahead of its plan, investments must take form in Greece to support the rapid development of tourism.

According to Mr. Andreadis, by 2021 Greece will need 150,000 beds in new four- or five-star hotels and an additional 100,000 beds in upgraded units to satisfy the future demand for beds in the country.

SETE’s president added that without any form of incentive, investment plans of the new NSRF will not go forward nor will there be any serious interest in Greece’s investment law.

Reports said the Greek Development Ministry is already making an effort for Greece to be excluded from EU Directive 651 for investments to move forward and unemployment to drop.