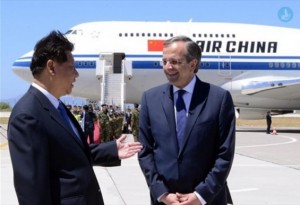 Chinese President Xi Jinping expressed his wish to serve as an ambassador for Greek tourism, during a recent stopover on the Greek Island of Rhodes on his way to Brazil to attend the 6th BRICS Summit.

During his short stop on Rhodes on 13 July, the Chinese president visited some of the island’s most popular tourist sites and was met by Greek President Karolos Papoulias and Prime Minister Antonis Samaras. Their talks were held in a warm climate and focused on boosting bilateral ties between China and Greece.

According to media reports, President Xi sent a message of support to Greece’s economic recovery drive and said he intended to personally promote Greek tourism in his country.

During his talks with Greece’s PM, the Chinese president made special reference to transportation infrastructure, maritime, energy and green economy and said that Beijing would back Chinese companies’ efforts to develop the port of Piraeus and the improvement of the railway system, Greek Kathimerini newspaper informed.

On his side, the PM Samaras said Greece is interested in strengthening maritime cooperation with China. He suggested that the Mediterranean nation could serve as a regional hub for the support of Beijing’s commercial and military vessels.

This was the second visit by a Chinese leader to the European country within a month. Chinese Premier Li Keqiang visited Greece in June for the signing of economic deals worth some 6.5 billion euros between the two countries.

Within the past year, China and Greece have strengthened bilateral ties through several high level official visits in both countries. “And though largely symbolic, President Xi’s visit is another step forward towards more cooperation between China and Greece,” China’s CCTV.com media commented.