May 2014: Greek Airports Among Those With Highest Passenger Traffic In Europe 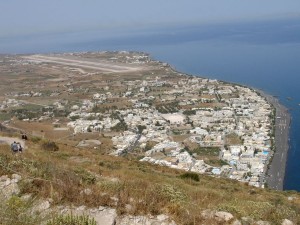 The airports in Athens and Santorini are among the European airports that had the highest increase in passenger traffic in May 2014 compared with the same month last year, according to data released recently by European airport trade body Airports Council International (ACI) Europe.

More specifically, according to the ACI Europe Airport Traffic Report – May 2014, Athens International Airport (AIA) experienced an 18.5 percent increase that month. ACI Europe has included AIA in the group of European airports welcoming between 10 and 25 million passengers along with the airports of Milan, Istanbul, Brussels and Lisbon.

(It is also noted that Athens Airport was honored as the best European airport in the “10 – 25 million passenger” category at the 10th Annual ACI EUROPE Best Airport Awards held in Frankfurt last month.)

Santorini (Thira) Airport is also among those that experienced the highest increases in passenger traffic in Europe in May. According to ACI EUROPE, Santorini’s airport saw an increase of 42.6 percent that month. The Greek Island is included in the group of European airports welcoming less than 5 million passengers per year.

In regards to the whole European airport network, ACI EUROPE reveal a robust year-on-year increase of 4.8 percent in passenger traffic compared to May 2013. For more on the report, press here.

Passenger Traffic Up 4.8% At European Airports During May

Tourist Traffic In Greece Soars In First Half Of 2014