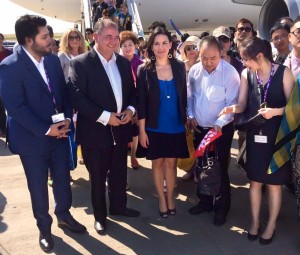 A weekly non-stop flight connecting Shanghai to Athens has been launched by the Shanghai Workers International Travel Service, a leading tour operator in China.

The flight will carry 180 passengers per week to the Greek capital and run until 19 October 2014.

The launch of the new route is another key step taken to strengthen the Chinese market’s contribution to Greek tourism. According to the Greek Tourism Ministry, the temporary Shanghai-Athens route is an encouraging factor for other new direct flights to launch from other major cities of China.

“Today is very important for Greek tourism,” Greek Tourism Minister Olga Kefalogianni said on 16 June during a welcome ceremony for the first passengers that arrived at Athens International Airport from Shanghai.

Mrs. Kefalogianni underlined the importance of air transport for the development of Greek tourism.

The ministry aims to establish a permanent direct air link between the two countries to increase arrivals from China to Greece.

Greece is one of the most popular destinations for Chinese tourists. Last year, arrivals from China to Greece increased by 132.1 percent compared with 2012 and reached 28.328, according to official figures from the Hellenic Statistical Authority (ELSTAT).

Austria Applauds Crete: “The Sunniest Island In The Mediterranean”