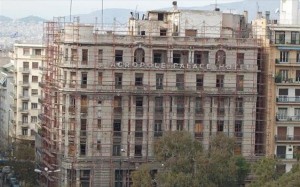 The abandoned Acropole Palace Hotel, located on the corner of Patision and Averof Streets in Athens center, will operate as a cultural center at the end of 2015.

“A priceless Athenian treasure will be developed,” the general secretary of the Greek Culture Ministry, Lina Mendoni, said during the meeting of the Central Council for Modern Monuments held in late May.

In 1990, the Acropole Palace (today a listed building) was characterized by UNESCO as “a shining example of ArtNouveau architecture in Europe.”

It was built in 1926-1928 by Greek architect Sotiris Magiasis and operated as the Greek capital’s “grand hotel” – with a capacity of 107 rooms and 173 beds – until the 1980s. Since its opening it had underwent three renovations until the big earthquake in Athens in 1981 that caused major damage.

The building has belonged to the culture ministry since 1997.

The historic building is currently undergoing restoration works, funded by the National Strategic Reference Frameworks, and is expected to open its doors late next year as a center for cultural events and programs.

The new cultural center is expected to to improve the National Archaeological Museum area in downtown Athens.

Zakynthos, Greece, Reports Impressive Increase In Tourist Arrivals In May

Shops To Open On Sundays In Seven Areas Of Greece