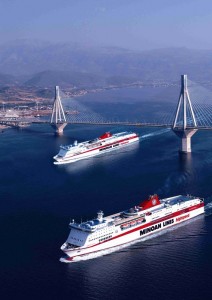 It is noted that the ferry shipping sector’s main feature is seasonality in the total turnover with the first quarter of the year being traditionally the least productive regarding the revenue recorded.

According to an announcement, the ferry company’s management has implemented a series of decisions aimed at reducing operating costs in recent years while the adoption of a flexible and dynamic commercial policy at current economic conditions led to gradual revenue increase.

“It is indicated that the adverse financial environment in the latest years along with the prolonged economic performance in Greece have negative impact on the ferry shipping industry confronting difficulties due to significant reduction of traffic volumes, persistently high fuel costs and intense competition among companies in the sectors,” Minoan Lines said.

Additionally, Minoan Lines proceeded to a Share Capital Increase which was successfully completed in March 2014 (coverage reached 100 percent) while the total proceeds shaped at 30.6 million euros.

Despite the prolonged economic downturns, Minoan Lines, being active on the Patras-Igoumenitsa-Ancona-Trieste route retained its top spot in the market share. During the three first months of  2014, Minoan Lines carried 55,000 passengers, 11,000 private cars and 19,000 freight units in both Ancona and Trieste ports.

Moreover, in the Ancona market, the company’s market share stood at 57.5 percent, 54.5 percent and 55.4 percent for passengers, private cars and trucks respectively. No other company is active on the Trieste Line.