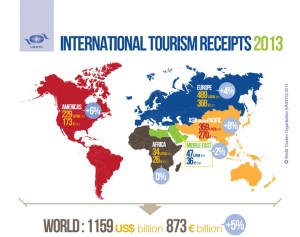 Receipts in destinations worldwide from expenditure by international visitors on accommodation, food and drink, entertainment, shopping and other services and goods, reached an estimated $1159 billion (873 billion euros) in 2013, reaching a five percent increase. The remaining earnings of $218 billion came from international passenger transport services.

“These are very positive results as growth in international tourists last year was equal to growth in income generated by over one billion tourists that traveled the world in 2013, for business, leisure, visiting friends and relatives or other purposes,” said UNWTO Secretary-General, Taleb Rifai.

Mr. Rifai said that such results confirm the increasingly important role of the tourism sector in stimulating economic growth and contributing to international trade.

“These results show that it is time to position tourism higher in the trade agenda so as to maximize its capacity to promote trade and regional integration,” he added.

International tourism (travel and passenger transport) accounts for 29 percent of the world’s exports of services and six percent of overall exports of goods and services. As a worldwide export category, tourism ranks fifth after fuels, chemicals, food and automotive products, while ranking first in many developing countries.