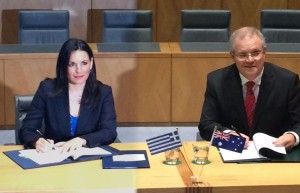 Young Greeks will now be allowed to work in Australia on a holiday visa for a year, according to a bilateral agreement signed on 14 May between Greece and Australia.

The Work and Holiday Visa agreement, which aims to strengthen ties and promote travel of young people between the two countries, was signed at the Federal Parliament in Canberra between Greek Tourism Minister Olga Kefalogianni and Australian Minister for Immigration and Border Protection Scott Morrison.

According to the agreement, young adults (aged 18-30) can obtain a tourist visa for travel between both countries to live and work for up to 12 months. Under the Work and Holiday Visa agreement, Australia and Greece will have a limit of 500 work and holiday visas for each country annually. 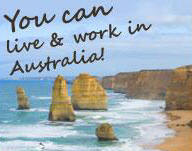 After signing the agreement, the Australian minister said that the agreement would be extended if successful.

The agreement will come into effect in Greece once ratified by the Greek Parliament.

The Australian Work and Holiday visa will be valid for a year from the date of first entry and holders are permitted to leave and re-enter Australia any number of times during this period. The Australian Visa Services website “Migration Expert” notes that applicants are required to hold or be studying for a tertiary qualification and speak functional English.

The Work and Holiday Visa Agreement is expected to strengthen the relations and the development of multiple partnerships between Greece and Australia.

According to Bank of Greece, the average expenditure per trip of Australians visiting Greece is 1,369 euros.