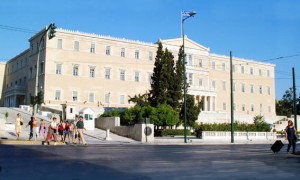 Greece is expected to welcome over 18.5 million foreign tourists this year with an estimated revenue of 13 billion euros, according to a study of Infobank Hellastat.

As noted in the study, already in the first quarter of 2014, air arrivals from abroad at major Greek airports have increased by 23 percent compared with the same period in 2013.

According to Alexis Nikolaidis, Economic Research & Sectoral Studies Analyst, the election of the Greek Government in June 2012 created a climate of political stability and improved the global image of the country in regards to its European perspective.

In 2013 the Greek tourism industry benefited greatly from booking cancellations that occured in competitive neighboring countries affected by political and social unrest (Egypt and Turkey). The number of incoming tourists to Greece last year increased by 15.5 percent, reaching 17.9 million tourists with revenue amounting to some 12 billion euros, a 14.9 percent increase compared with 2012.

Most international visitors came from Russia, as during the last two years the number of tourists from that country almost doubled, surpassing 1.3 million visitors in 2013.

According to the study, most Greek hotels reduced their prices last year and secured a greater number of tourists. This made Greece the second cheapest country in the Mediterranean after Egypt regarding hotel services.