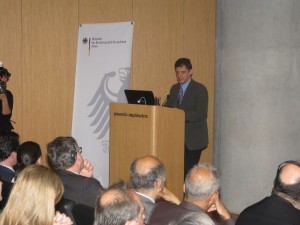 German arrivals to Greece were up by 7.5 percent in 2013 compared to the year before, according to data presented at a tourism event  in Athens on 9 May.

The event entitled “Tourism: An Emerging Market” was held at the Acropolis Museum by the Hellenic Chamber of Hotels and the Embassy of the Federal Republic of Germany in Greece.

During a presentation on the travel trends of the Germans, Christian Gonsa from German company MStR Consult UG, informed that 2,267,546 Germans visited Greece last year against 2,108,787 in 2012.

Tourists from Germany are expected back to Greece in 2014 as long as the country maintains attractive travel packages and political stability.

The Germans are not spending like they used to 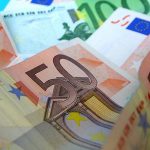 However, although Germany is Greece’s top international market, the country is not Greece’s biggest spender. In 2013, German tourists spent 1.9 billion euros during their holidays in Greece as opposed to 2005 when almost the same amount of tourists visited the country and spent 2.23 billion euros. On the other hand, the travel expenditure of Russian tourists is on the up.

Mr. Gonsa added that it is essential for Greece to attract more investments, particularly in the hotel industry, and tackle seasonality as these are the main reasons that the contribution of tourism to the country’s GDP has remained unchanged over the past decade and still has not surpassed 17 percent.

Greece has more to offer 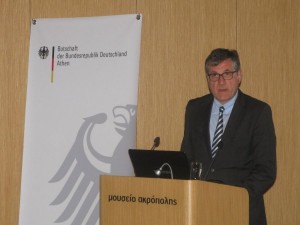 Ambassador of the Federal Republic of Germany to Greece, Peter Schoof. Photo © GTP

But, according to the Ambassador of the Federal Republic of Germany in Greece, Peter Schoof, Greece has so much more to offer. “We see great potential for development in cultural tourism, city breaks, medical tourism and marine tourism,” Mr. Schoof said.

On medical tourism, the ambassador referred to the embassy’s close cooperation with the tourism and health ministries in Greece. He underlined that the development of medical tourism would benefit many Greek destinations and also extend the season beyond the summer months.

At the event, it was also mentioned that Greece should also invest in the development of its walking trails. Germany collects some 13 billion euros a year just from this form of tourism.