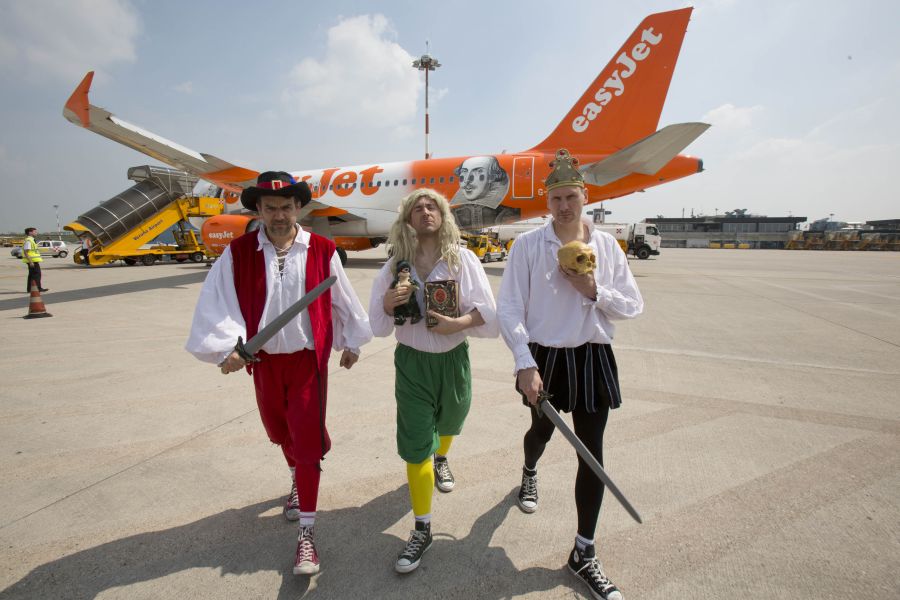 Low-cost airline easyJet celebrated the 450th anniversary of Shakespeare’s birth (23 April) with a Guinness World Record performance of his complete works during a flight to Italy. 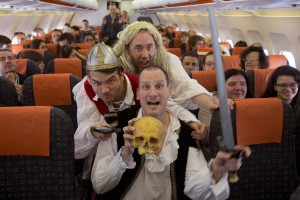 The Reduced Shakespeare Company performed an abridged version of the playwright’s complete works in front of passengers on the 10:20am departure from Gatwick to Verona. The play lasted one hour and easyJet hopes to set a Guinness World Record in the process for the “highest theatrical performance” at 37,000ft.

Heritage and culture remain one of the key drivers of tourism to the UK (Visit Britain report) and the airline has run a month long campaign to promote the best Shakespearean sites to UK visitors as well as staging free performances of the playwright’s work at check in desks.

The production took place onboard a special edition easyJet plane complete with a ten foot image of the Bard on the fuselage. Three actors from the Reduced Shakespeare Company performed at the front of the aircraft and have been rehearsing in easyJet’s Luton training centre in preparation for the unique show.

“Our campaign to make 23 April National Shakespeare Day has run throughout April with seat back advertising on hundreds of flights, free performances at airports and information in our inflight magazine which is read by 5 million passengers a month,” Paul Moore, communications director for easyJet, said.

easyJet is asking its UK passengers to sign the petition while suggesting to those from the rest of Europe that they visit the land of Shakespeare to learn more about him and see his works performed.

The petition to make 23 National William Shakespeare Day has been backed by Stratford-Upon-Avon MP Nadhim Zahawi and Bloomsbury Publishing and needs 100,000 signatures by the end of July to take the debate to Parliament.

For more information about the campaign and to add support, press here or #Shakesonaplane