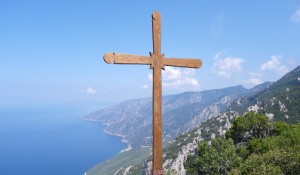 Early bookings to the area of Mount Athos in Halkidiki for this year’s tourism season are already showing an impressive increase, data from travel agencies that have deals with local hotels has revealed.

According to an announcement by the Mount Athos Area Organization, a 50 percent rise has been recorded in early bookings compared to last year, mainly from markets across Europe and the Balkan Peninsula. When referring to early bookings made by Russian travelers this year, the organization estimates that arrivals from Russia should be on 2013 levels.

The organization also said that this year Mount Athos expects dynamic growth from new markets such as the Netherlands and France. Arrivals from Germany, the United Kingdom and Italy are also expected to increase.

Meanwhile, hotel occupancy in the area during the Easter peak season is expected to show an 80 percent rise. Reservations have mainly been made by the markets of Greece and those of the Balkan Peninsula.

In addition, the Mount Athos Area Organization informed that the 2013 tourism season was expanded by four months due to tourist demand, following cooperations that were launched with travel agencies from abroad that specialize in thematic tour packages.

Athens Is Making A Comeback But More Can Be Done