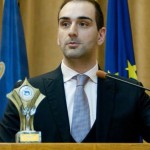 Nikolaos Koklonis, the president and founder of Greek online travel booking company AirFastTickets, was recently honored by the Association of Corfu in Piraeus and the Korfou Journalism Organization with the 2013-2014 Person of the Year award for his contribution to e-business.

“AirFastTickets, an effort that kicked off with a lot of hard work and love in 2009, now has grown and spread its wings to show the world how we Greeks perceive e-business,” Mr. Koklonis said when accepting the award named “Yiorgos Kasimatis.”

“Although I divide my time between many countries, today I am very touched to be honored in the city that I love deeply: my favorite Piraeus,” he added.

The annual Person of the Year awards took place at the Piraeus Chamber of Commerce. The sixth edition of the awards were celebrated under the auspices of the Ministry of Education and the Association of European Journalists. Many representatives from Greece’s arts, media and business scene attended the event.