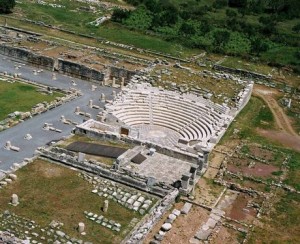 Ancient Messene, Western Peloponnese, has been included on Greece’s tentative list of sites and monuments for potential nomination for UNESCO World Heritage Status.

One of the most important excavated cities in Greece, Messene is considered a significant ancient city in terms of its size, form, and state of preservation, and still has much to offer. It possesses not only sanctuaries and public buildings, but also imposing fortifications, and houses and tombs.

It enjoys, amongst other things, the advantage of never having been destroyed or covered by later settlements, and is located on an unspoiled inland site.

In 2011, the site of Ancient Messene was awarded the Europa Nostra Award in the category of preservation.