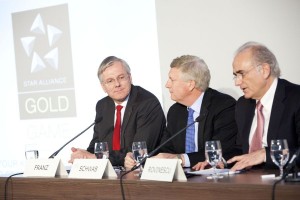 The Chief Executives of Star Alliance member airlines, representing one-third of the global aviation industry, met in Vienna recently to discuss the strategic development of the Alliance, including the benefits offered to its most loyal customers, its membership strategy and important projects and topics for 2014.

According to Calin Rovinescu, chief executive of Air Canada and chairman of the Alliance’s Chief Executive Board (CEB), it was reaffirmed that the universal offering of the Star Alliance Gold status benefits across the network was a major attraction of the Alliance for customers and that every effort must be made to deliver these benefits consistently across the globe.

A further central topic in the CEOs’ discussions was the Alliance’s membership strategy, which focuses on having a strong global network that benefits both customers and the member airlines.

The CEB reaffirmed that the Alliance model was an important component in today’s competitive environment and noted that Star Alliance is not only still the largest of the three airline alliances but also has the most robust experience in growing its membership smoothly.

Looking ahead to 2014, the opening of Terminal 2: the Queen’s Terminal at London Heathrow on 4 June 2014 will be a major milestone for the Alliance, offering the first opportunity for all 22 Star Alliance member airlines that operate to Heathrow to be located in the same terminal.

The CEB’s next meeting will be held In London to coincide with the opening of the new terminal.