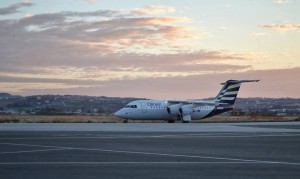 The aircraft, a 96-seat Avro RJ85, will remain at Thessaloniki’s airport to undergo a full certification/qualification flight test program by the Civil Aviation Authority.

Once cleared, during the first months of 2014, Mouzenidis will launch flights initially from countries of the former Soviet Union to Greece.

During that time, Mouzenidis will proceed with purchases or rental of additional aircraft to form the Ellinair fleet and launch regular flights to Russia, Ukraine and Belarus. In 2014, the new Greek carrier is expected to link 20 Russian destinations with various Greek cities.

Mouzenidis Travel is one of the largest Greek companies working with the Russian market.