Study: Greece Lags Behind In Online Activity For Travel 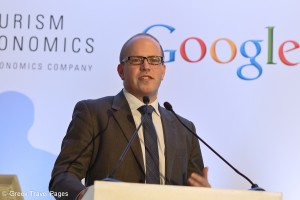 David Goodger, Director of Tourism Economics, Oxford Economics. According to Mr. Goodger, benefits from increased online activity would be greater for small businesses.

The tourism industry in Greece would benefit from a long-run increase in demand of up to 20 percent if action were taken to increase online activity to match that of leading EU countries. Taking wider benefits into account, including the supply-chain, this would increase Greece GDP by three percent and generate over 100,000 new jobs.

This was concluded from an Oxford Economics study entitled “The Impact of Online Content on European Tourism,” supported by Google and endorsed by the Association of Greek Tourism Enterprises (SETE), that was presented recently in Athens. The study explores the value of online content to the tourism economies of Greece, Italy, and Spain. 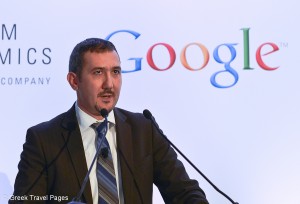 Dionisis Kolokotsas, Public Policy Manager, Google. Mr. Kolokotsas mentioned that 68 percent of tourists seek information about their trip online, before going to a destination while 42 percent uses the Internet during their trip.

According to the study, online content currently supports 10 percent, 26 percent, and 43 percent of all tourist arrivals in Greece, Italy, and Spain, respectively. Meanwhile, the EU average is 49 percent, including research and booking. “This leaves significant upside potential for the tourism industry in these countries to more fully embrace an online presence,” the study notes. 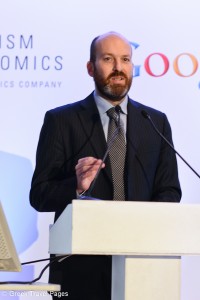 Edoardo Colombo, Advisor to Italy’s Prime Minister for Digital Agenda. During the presentation, Mr. Colombo referred to a proposal that sees the digital agenda focusing on the tourism sector when Greece and Italy assume the rotating EU Presidency in the first and second half of 2014, respectively.

Travel to Greece is estimated to involve the lowest interaction with online content of the three destinations. Just five percent of trips to Greece are booked online while only 10 percent of visitors researched their trip online. “These lower shares relate to the relatively low proportion of businesses selling online,” according to the study.

Within the European tourism sector, the exploration of culture is a key motivator for travelers, accounting for 22 percent of tourism trips made by EU27 citizens in 2011. Culture-related searches in top travel-generating markets account for 45 percent of all tourism-related searches on Greece.

Increased cultural online content alone could have a long-run benefit to whole economy GDP of around 1.5 percent in Greece, generating 50,000 new jobs.

Among conclusions for Greece, the study underlines that given the low proportion of establishments online in the country, there remains a large opportunity to expand this market by increasing online content. 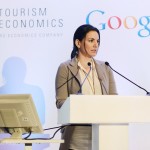 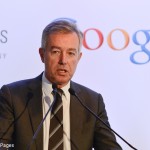 Andreas Andreadis, President, Association of Greek Tourism Enterprises. SETE's president referred to the world-class website discovergreece.com that Marketing Greece is preparing to launch in January 2014. According to Mr. Andreadis, the new website will aim to give the Greek tourism product the best possible promotion that will eventually lead to a major increase in arrivals to the country.

In order to achieve this opportunity, the tourism industry in Greece, Italy, and Spain would need to take at least some of the following steps:

Kefalogianni: Development Of Medical Tourism In Greece Is A Priority