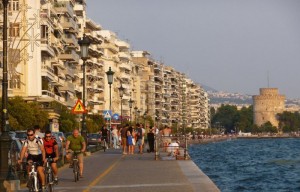 The Thessaloniki Hotels Association have expressed their disappointment with the Civil Aviation Authority’s (CAA) recent decision to reject a Turkish Airlines request for a second daily flight to and from Thessaloniki.

A second daily flight would double the weekly Istanbul-Thessaloniki-Istanbul flights from seven to 14.

Thessaloniki’s hoteliers stressed that the CAA’s decision was an obstacle to the northern Greek city’s tourism and economic development as it upsets plans to attract tourists from new distant market such as India, China, Azerbaijan and the Arab Gulf countries via Istanbul.

“It is a known fact that in the last two years our Turkish neighbors have made Thessaloniki a popular destination for getaways and a significant increase in overnight stays has been recorded with an upward trend,” the association said in a statement.

The hoteliers added that doubling the direct flights of Turkish Airlines to Thessaloniki would only have positive results for hotels and city revenue.

On its part, the City of Thessaloniki said that the CAA’s decision “cuts off northern Greece from dynamically developing tourism markets” and “deprives Thessaloniki of millions of euros in tourism revenue.”

According to Athens News Agency, the local business community is considering to launch a signature collection initiative in an effort to overturn the decision.

Crete Celebrates 100 Years Of Union With Greece In London