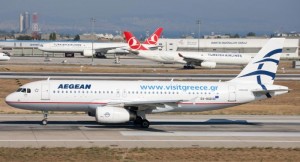 Greek carrier Aegean Airlines said it supports a recent decision of the Civil Aviation Authority (CAA) that blocked a Turkish Airlines request for a second daily flight to and from Thessaloniki.

According to Greek tourism website Hrima kai Tourismos, Aegean said that the CAA’s decision was justified since the Turkish carrier does not play by European Union rules.

“Since 2009 we have been making requests for a slot in Istanbul and they will not give us one,” Eftychios Vassilakis, Aegean’s Vice-President, said.

Mr. Vassilakis said that as a non-EU country, Turkey does not follow EU aviation rules and the local carriers call all the shots.

He added that four year’s ago, Aegean had announced the launch of a direct Thessaloniki-Istanbul flight, which never went forward as no slot was given to the airline.

“Last year, Turkish Airlines and Pegasus received more slots in Athens and in the last five years both Turkish companies have essentially tripled their activity in Greece, either by flying to Thessaloniki or to Athens,” he said.

According to Mr. Vassilakis, Aegean had requested slots in Istanbul to operate a direct flight from Heraklion, Crete, and received a “junk slot” that translated to a 4am arrival time in Istanbul with a 5am departure to Athens.

“At some point they must show reciprocity,” Mr. Vassilakis concluded.

For the original article, in Greek, press here.