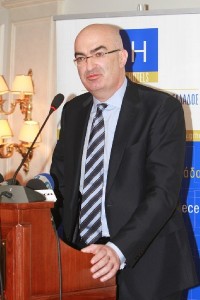 For the second time in a row Yiorgos Tsakiris was elected to head the Hellenic Chamber of Hotels. The election for the chamber’s new Board of Directors took place 22-23 September 2013.

“The members of the new Board of Directors of the Hellenic Chamber of Hotels have given us the go-ahead to continue, with all our forces, the battle for the promotion and development of the Greek hotel industry, the upgrade of the Greek tourism product and – ultimately – to lead the country out of the recession,” the chamber’s president said referring to his re-election.

“This command is an obligation for the new executive committee and myself,” Mr. Tsakiris said.

The newly-elected Board of Directors will take office on 15 January 2014.

Hellenic Chamber of Hotels Board of Directors

Members (according to their merits)
Alexandros Angelopoulos, Andreas Fiorentinos