Skorpios Island “Decorated” With Replicas Of The Caryatids 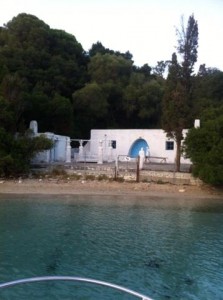 Russian billionaire Dmitry Rybolovlev has included six plaster statues of Greece’s famous Caryatids to decorate the beachfront of the private Skorpios Island, which is owned by his daughter, Ekaterina.

In April, Skorpios – along with the nearby islet of Sparti – was sold to 24-year-old Ekaterina Rybolovleva for the unconfirmed amount of $150 million. Aristotle Onassis had bought the island for $10,000 back in 1962.

At the time of the sale, the legality of Skorpios’ transfer of ownership was strongly questioned as, according to the will of Aristotle Onassis: if his heirs cannot bear the cost of maintaining the island, it should be transferred to the Greek state or to Olympic Airlines.

On the other hand, local authorities have claimed the purchase is most probably a long-term lease.  Locals from the Ionian region would like to see Skorpios revive as it would give a boost to the region’s economy.

Reports have mentioned that Rybolovlev’s daughter has plans to create an island retreat for the world’s rich and powerful.