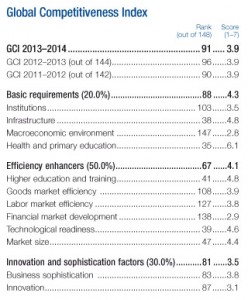 This year Greece, after falling over the past several years, improves in the rankings of 148 countries from 96th place to the 91st in the Global Competitiveness Report 2013-2014, released on 4 September by the World Economic Forum.

According to the report, although it remains the lowest-ranked country of the European Union and the results in the macroeconomic environment pillar continue to raise concern (second to last at 147th position this year fromm 144th in 2012), Greece has started to show improvements in a number of other areas, perhaps indicating that the reform efforts are beginning to bear fruit.

Slight improvements are seen in the country’s institutional environment, the efficiency of its labor markets, and technological adoption, although continued efforts in these areas are still needed.

Although some progress is being made, public institutions (e.g., government efficiency, corruption, undue influence) continue to receive a poor evaluation (102nd) and confidence has not returned to financial markets in the country (138th).

The country’s inefficient labor market (127th) continues to constrain Greece’s ability to emerge from the crisis, although this has improved somewhat since last year, perhaps reflecting recent efforts to increase both the retirement age and labor market flexibility. 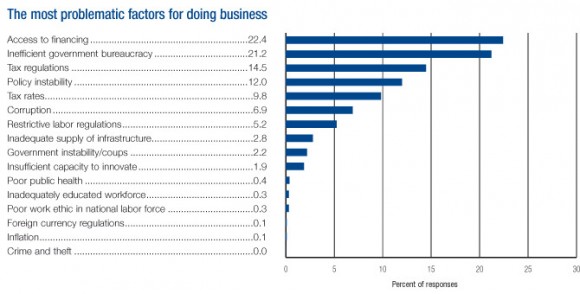 “In working to overcome its present difficulties, Greece has a number of strengths on which it can build, including a reasonably well educated workforce that is adept at adopting new technologies for productivity enhancements,” the report noted.

“With continued efforts toward growthenhancing reforms, there is every reason to believe that Greece will continue to improve its competitiveness in the coming years,” the World Economic Forum report concluded. 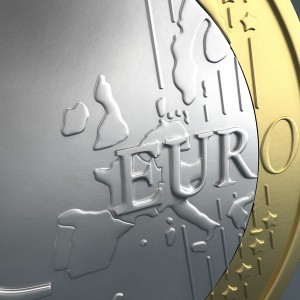 In regards to Europe, the World Economic Forum report noted that efforts to tackle public debt and avoid a break-up of the euro have taken the focus off addressing deeper competitiveness issues.

“Southern European economies such as Spain (35th), Italy (49th), Portugal (51st) and notably Greece (91st) all need to continue addressing weaknesses in the functioning and efficiency of their markets, boost innovation and improve access to finance in order to help bridge the region’s competitiveness divide,” the report said.

The report’s Global Competitiveness Index places Switzerland at the top of the ranking for the fifth year running. Singapore and Finland remain in second and third positions respectively. Germany moves up two places (4th) and the United States reverses a four-year downward trend, climbing two places to fifth. Hong Kong SAR (7th) and Japan (9th) also close the gap on the most competitive economies, while Sweden (6th), the Netherlands (8th) and the United Kingdom (10th) fall. 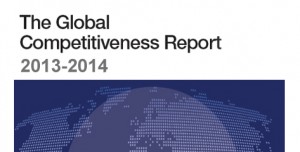