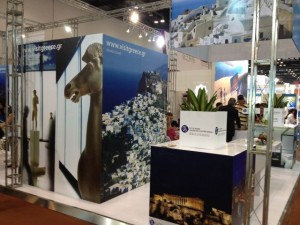 Athens and Santorini are the most popular Greek destinations of residents of the wider Beijing area, the Athens Convention and Visitors Bureau (ACVB) concluded after taking part in the Beijing International Tourism Expo 2013 in China.

ACVB participated in the expo, held held 21-23 June, as a co-exhibitor of the Greek National Tourism Organization to promote the tourism product of the Greek capital to emerging international tourism markets.

ACVB presented the Greek capital’s tourism services, infrastructure and options the city can provide to visitors.

According to the bureau, the Chinese showed special interest to leisure and business tourism, while an interest was also recorded for corporate meetings to be held in Athens by delegations of the regional government.

At this workshop, representatives of urban destinations and cities in Europe have B2B meetings and discuss marketing opportunities with strictly selected professionals from the international and European tourism market, such as tour operators, conference organizers, online travel agencies, etc.

ACVB held 27 business meetings and concluded that there is a reinvigorated interest in Athens as a city break and conference destination.

Titania To Hold 2nd “Made In Greece” Food Tasting Festival