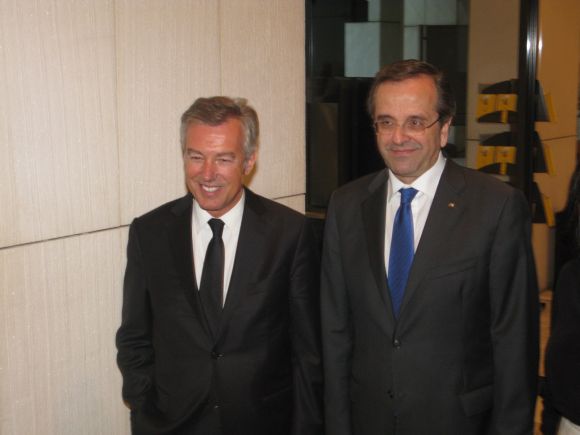 “We want to make Greece one of the 10 best tourism destinations in the world,” Greek Prime Minister Antonis Samaras said on 29 May during the 21st annual general assembly of the Association of Greek Tourism Enterprises (SETE) in Athens.

Characterizing tourism as a “champion of development,” Mr. Samaras appeared optimistic on this year’s tourism season, which he expects “to bring the first victory to the effort being made for the economy’s recovery.” 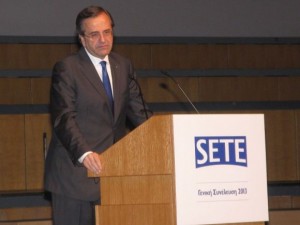 However, the Greek PM said that for Greece to become a “key gateway” for tourism traffic, the obstacles for issuing visas for visitors from non-Schengen countries (China and Russia) must be overcome and regular and direct air links must be launched, especially during high season.

He added that all road networks and ferry lines must be improved to facilitate the movement of tourists in Greece.

“The aim is to extend the tourism season to 12 months and shift from mass to quality tourism,” Mr. Samaras said.

No announcement on VAT reduction

Although the majority of Greek tourism professionals expected the Greek PM to announce the much-anticipated VAT reduction on food catering services (restaurants, hotel restaurants, cafeterias, etc.) from 23 to 13 percent, Mr. Samaras made no announcement.

However, he said the Greek Government was giving a “great battle” to accomplish the reduction.

(A decision on the matter is expected in June after the Greek Government holds discussions with the troika of the country’s international lenders – European Commission, European Central Bank and International Monetary Fund. It is reminded that the Greek government had increased the VAT charged on Greek food catering services from 13 to 23 percent – 77 percent increase – in September 2011.)

On her part, Greek Tourism Minister Olga Kefalogianni made reference to the contribution of tourism to the Greek economy.

According to Mrs. Kefalogianni, with proper management, careful steps and targeted policies, tourism has the potential to increase its contribution to GDP and employment by 50 percent by the end of this decade.

“We can not afford to rest on periodic successes. We must and will seek the best (result),” the tourism minister said. In this context, she said the cooperation of the state and private sector was more than necessary.

She also made reference to the new tourism bill expected to be tabled in Parliament soon.

According to the tourism minister, the new bill will contribute significantly to the quality of the country’s tourism product. 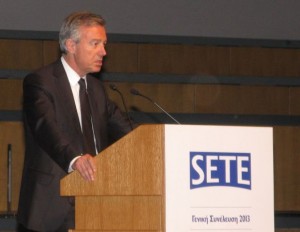 SETE’s president, Andreas Andreadis, made reference to the association’s plan for 2021 that sees international tourism arrivals topping 24 million, with direct and indirect revenues reaching up to 50 billion euros (against 32 billion euros in 2012) and workers in the sector increasing to one million (from 780,000 currently).

Mr. Andreadis said that this year’s bookings for the summer of 2013 were showing that a record of 17 million visitors will come to Greece this season.

SETE’s president also referred to the new private company Marketing Greece that will work together with the Greek Tourism Ministry and the Greek National Tourism Organization for the creation of a new tourism identity for Greece and its destinations and effectively promote the country’s tourism products.