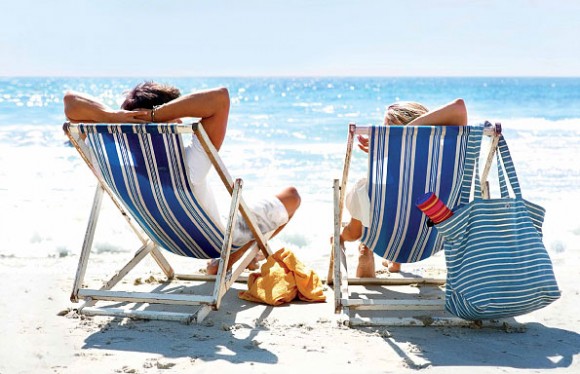 Most detailed study of the German holiday market released 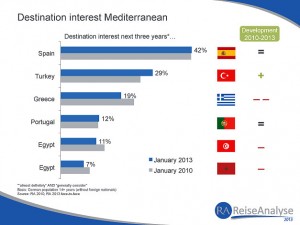 The overall demand of the Germans is stable but since 2010 there are changes in destination preferences: LOSERS: Greece, Egypt, Tunisia – WINNERS: Turkey and Spain

“Crisis countries” Greece, Egypt and Tunusia were the “losers” last year in regards to the holiday preferences of the Germans, according to the Reiseanalyse study of the German holiday market. The study was presented during this year’s ITB Berlin trade show (6-10 March).

According to the study, looking at the future potentials as well as at the actual demand, the decline in Greece is the most relevant while Egypt and Tunisia are also affected.

But the actual demand of the Germans did increase to some extent in 2012 as data showed that Turkey (rise in expressed interest) and Spain (rise in actual demand) are benefitting most from the current situation.

The Reiseanalyse study showed that 2012 was another good year for traveling as travel expenditure reached new record highs: spending on holiday trips (5 days and longer) increased by 4 percent compared to 2011 – to more than 63 billion euros.

As from the beginning of the year, most people in Germany are already in “holiday mood” the survey said: 55 percent of the population have concrete travel plans, only 12 percent are certain that they will not go on holiday in 2013. Most are planning with the same holiday budget as the year before, 12 percent want to spend even more, 10 percent less than in 2012. All figures are almost on par with the previous year’s level. 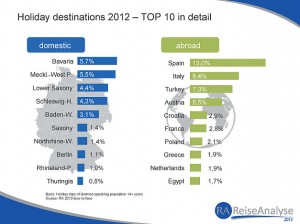 TOP 10 Holiday destinations for the Germans in 2012 – The data is based on holiday trips (5+ days) of the Germanspeaking population aged 14 years and above. Business trips and trips of less than 5 days are not included. This has to be taken into consideration when comparing data to e.g. official statistics which usually use different definition criteria.

With a market share of 31 percent of all holiday trips, Germany was again the most popular holiday destination for the Germans in 2012. Spain, Italy, Turkey and Austria followed in the ranking.

“Almost two thirds of all annual holiday trips lead to one of these five destinations,” the Reiseanalyse study said.

“This indicates once more the flexibility of the customers – travelers are multi-optional which means that many destinations are able to satisfy their specific holiday needs,” the study showed.

The annual Reiseanalyse study is conducted by the Forschungsgemeinschaft Urlaub und Reisen e.V. (FUR) and is considered to be the most detailed study of the German holiday market. The FUR is an independent association of users of tourism research in Germany and the largest non-commercial organiser and contractor of tourism research.

To read the selected first results of the current Reiseanalyse 2013, press here.