Greece is a safe destination for travelers to visit and enjoy their holiday, however its image is severely affected by the over exposure of demonstrations and riots in the city center, according to a round table discussion held recently by the American Hellenic Educational Progressive Association (AHEPA) Glyfada chapter at the University of Indianapolis in Plaka, Athens. 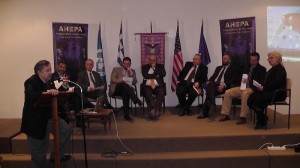 “Travel to Greece – Is it safe?” was the main topic discussed and analyzed by members of the Greek American community in Greece, tourism professionals and politicians.

According to keynote speaker George Nikitiades, former deputy tourism minister, demonstrations that have taken place in Athens have never caused harm to any tourist as violence is directed to property damage.

Mr. Nikitiadis added that televised scenes, although truthful, are exaggerated since they are limited to a 3-4 sq. mile area around the Parliament.

Tourists on Ermou street in Athens. According to the panel, safety for tourists in Athens is not any different than any other major metropolitan city in the world. The panelists agreed that there are “hundreds of options available to visitors” should there be a public demonstration of any kind that will not affect a travelers vacation to Greece.

On his part, the president of the Athens-Attica & Argosaronic Hotel Association, Alexandros Vassilikos, said that hoteliers in Athens have become recipients of the concerns of visitors for safety issues in Greece.

Mr. Vassilikos said that at times, hoteliers in Athens have had several “shocking inquiries” from tourists such as if the ATMs have cash or if food is available in the city.

“I find that although Athens is safe, its image has been hurt abroad,” he said.

AHEPA does its part to support tourism

According to AHEPA, the topics of the round table discussion were actual questions found posted on various website articles and blogs from people wanting to visit Greece.

The key topics covered at AHEPA’s round table discussion were: Living/Visiting Athens and safety; The economic crisis and impact on traveling in Greece; and Greece’s Socio-Economic factors affecting traveling.

“Not seeing any significant marketing campaigns, AHEPA Glyfada decided to do its part by inviting the speakers to respond and let the world know,” AHEPA said in a press release.