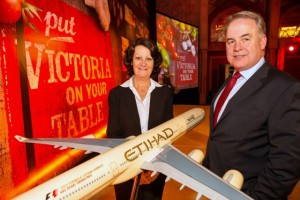 Etihad Airways, the national airline of the United Arab Emirates, will increase capacity on its daily flights between Abu Dhabi and Melbourne, introducing a new Boeing 777-300ER aircraft from 1 December 2013.

“Melbourne is one of the best-performing routes in our global network, and has the highest passenger load factor of our three Australian destinations,” James Hogan, President and Chief Executive Officer of Etihad Airways, said recently at a business dinner hosted by the Victorian Government.

Since launching flights between Melbourne and Abu Dhabi in March 2009, Etihad Airways has carried over 580,000 passengers on the route, including 162,112 last year. Already this year, a load factor of eight percent has been achieved, one of the highest in the airline’s network of 86 destinations.

Etihad Airways’ three-class Boeing 777-300ER will offer eight seats in Diamond First class, 40 in Pearl Business class and 280 in Coral Economy class. The airline currently operates 13 Boeing 777s and will add a further five this year, enabling the increase in capacity to Melbourne.