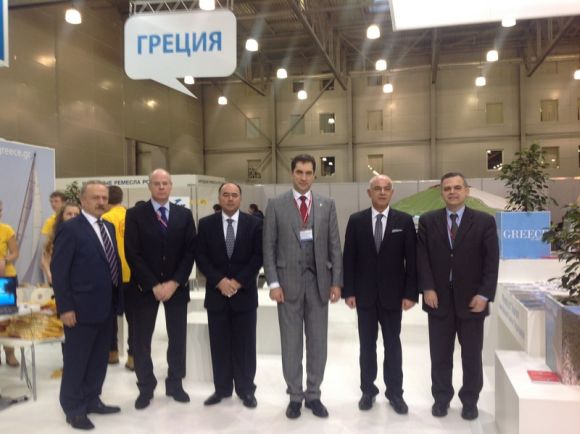 Greek Secretary General of Tourism Anastasios Liaskos (second from right) and the Deputy Head of the Federal Agency for Tourism Evgeny Pisarevsky (third from right) at the Greek stand at the International Travel Fair INTOUR MARKET in Moscow.

“Greece is a favorite destination for Russians… The cooperation between the Greek and Russian tourism ministries is expected to lead to a large increase in incoming tourism from Russia to Greece,” the Head of the Federal Agency for Tourism of the Russian Federation Alexander Rad’kov said recently during a meeting with Greek Secretary General of Tourism Anastasios Liaskos in Moscow. 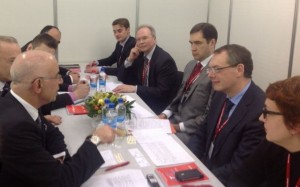 During the meeting, Mr. Liaskos developed the Greek Tourism Ministry’s positions and requested the assistance of Mr. Rad’kov to achieve further growth of incoming tourism from Russia to Greece. He noted that both the Ambassador and the Consul of Greece and the Greek National Tourism Office (GNTO) office in Moscow were available to take action at all levels for the success of Greek-Russian tourism cooperation.

Both sides also focused on the development and cooperation of Greece’s alternative forms of tourism such as religious-pilgrimage, yachting-cruise, medical etc.

The tourism cooperation between the two ministries is expected to develop even further during the inter-governmental meeting of the Greek-Russian cooperation group in mid-April in Athens, a press release by the Tourism Ministry said.

The meeting was also attended by the Deputy Head of the Federal Agency for Tourism Evgeny Pisarevsky, the Chargé d’Affaires of the Greek Embassy Gerasimos Davaris and the Consul General of Greece in Russia Ioannis Plotas.

Greek services in Russia must cooperate

The Greek secretary general of tourism also held meetings at the Greek Embassy, the Consulate and the GNTO office in Moscow and underlined that cooperation was essential to dynamically increase the tourism flow from Russia in 2013.

“The synergy of all of our services abroad and the unified effort are requirements to achieve the target set by the Government and Tourism Minister Olga Kefalogianni so tourism remains the pillar of developmental reconstruction of our country,” he said.