Tourism Ties Between Greece And Japan To Grow Stronger 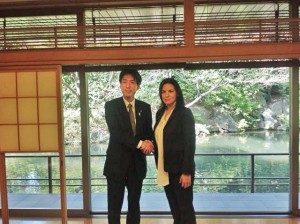 The possibility of launching a direct Athens-Tokyo air route to boost tourist traffic between Greece and Japan was discussed today, 12 March, in a meeting in Tokyo between Greek Tourism Minister Olga Kefalogianni and Japan’s Senior Vice-Minister of Land, Infrastructure, Transport and Tourism Yosuke Tsuruho.

During the meeting, both sides examined ways to form a tourism cooperation to promote Greece in the Japanese market and they agreed on combined efforts to increase tourism for both countries.

Given the economic crisis afflicting Greece, Mrs. Kefalogianni tried to change Greece’s image in Japan and highlighted the major structural changes taking place in the country.

The tourism minister invited Japanese journalists to Greece so they could see for themselves the true face of Greece and get to know the country’s culture and beauty.

The two ministers discussed bilateral issues and ways to cooperate on issues of national and international interest.

When talking to the press, the Greek tourism minister expressed optimism and said she expects an increase in arrivals from Japan to Greece.

“Japanese tourists are of a high quality level and this could contribute to upgrade Greek tourism,” she said.