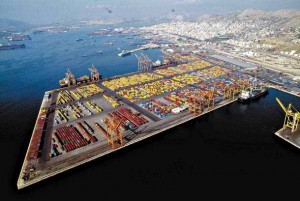 Piraeus is now an international transit hub following the signing of an agreement on Friday, 1 March, between American IT firm Hewlett-Packard (HP), Chinese shipping giant Cosco and Greek state railway Trainose for the use of Dock II in Piraeus Port.

Dock II will be used as a transport hub for HP products destined for Central Europe, the Middle East, North Africa and the Eastern Mediterranean.

The agreement provides for the transport of HP’s products via ship by sea from Asia to the Cosco terminal at Piraeus and from there by rail to central and eastern Europe by Trainose trains.

The agreement initially provides for the transport of 20,000 HP containers annually.

The Greek Government expects the agreement to create hundreds of jobs and lead to the signing of similar agreements with other multinational companies.

According to press reports, firms interested in similar agreements with Cosco and Trainose include IKEA, Dell, LG, Samsung, Lenovo, Sony and Hyundai.