Panepistimiou Street – “One step beyond” proposal by Okra.

Okra, a Dutch architectural firm, has won the “Re-think Athens” European architectural competition with a plan to radically transform the Greek capital by pedestrianising Panepistimiou Street in central Athens.

It is reminded that the competition involved the creation of a new city center, a multifaceted intervention centered on Panepistimiou Street, extending from Amalias Avenue to Patission Street and ending at a “brand new” Omonia Square.

With its “One step beyond” proposal, Okra was deemed the best out of 71 entries in the competition. 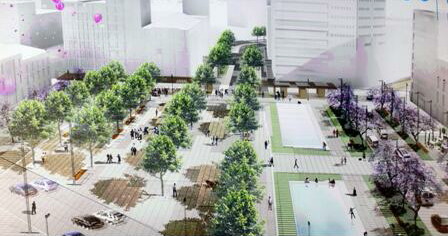 Omonia Square – “One step beyond” proposal by Okra.

According to the Dutch architects, their plan will make Athens into an affordable, vibrant city, resilient to climate change. The plan also takes into account the placement of trees on Panepistimiou Street to achieve optimal lighting and shading.

The project has a budget of 80 million euros and includes the conversion of Panepistimiou Street to a low traffic street from where the tram will pass.

All 71 entries of the “Re-think Athens” competition will be on display at the Onassis Cultural Center from Thursday 28 February to Wednesday 6 March 2013 in an exhibition curated by architect Panos Dragonas.
Opening hours: Monday to Sunday, 12 noon-9pm.

For more on the “Re-think Athens,” press here.

Panepistimiou and Korai Streets – “One step beyond” proposal by Okra.