The cultural background and artistic interest of Amorgos and the Cyclades will be promoted to Greek and foreign journalists at the 11th International Convention of Sustainable Tourism, Preservation & Protection of Natural & Cultural Heritage YPERIA 2013 to be held on Amorgos, 8-13 May 2013.

The convention this year will analyze the powerful cultural and environmental efforts in Greece and Amorgos within the European Union and focus on topics related to sustainable tourism and the preservation and protection of natural and cultural heritage.

Distinguished people from Greece and countries from around the world are invited for the occasion, mainly journalists interested in tourism and traveling, but also local authorities, political representatives, scientists, people from the theater and arts. 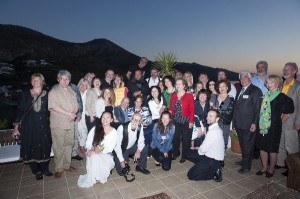 Parallel events of the convention will include tours around the island, photograph and painting exhibitions, workshops in Greek language and dancing, cooking, wine tasting and evenings of traditional local Food and Music.

Also, the 4th Festival of Short Tourism Films will be held to promote short films and develop ties and cooperation among producers from around the world.

The convention is organized by the Cultural Association of Tholaria Women in Aegiali–Amorgos in collaboration with Aegialis Hotel & Spa.

Greek Tourism To Be Discussed At ITB Berlin Convention 2013

Greece Gets Ready For ITB Berlin 2013