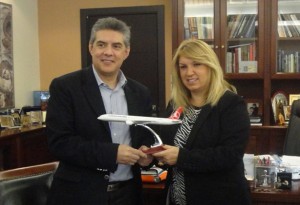 Thessaly will be promoted to new markets and Japan is first on the list, according to an agreement between the region’s governor Kostas Agorastos and the general director of Turkish Airlines in Athens, Gulay Ozturk.

During a meeting held recently in Thessaly, the region’s governor and Ms. Ozturk discussed plans involving joint actions and promotions that aim to “open” Thessaly to new markets. The ultimate goal is for Turkish Airlines passengers to visit Thessaly via organized travel packages.

“Turkish Airlines is the second largest airline in Europe and we are in a cooperation to promote Thessaly as a destination to attract tourists from new markets that are not aware of the region’s tourism product such as Japan, China, South Korea and India,” Mr. Agorastos said after the meeting.

On her part, Ms. Ozturk said Turkish Airlines flies to 220 destinations in the world and “we want to bring tourism from those areas to this very nice place.”

She added that they will first approach the Japanese market that has an interest for religious and cultural tourism apart from sea and mountain tourism.

For this purpose, a fam trip to Thessaly will be held for tour operators and journalists from Japan in June 2013.