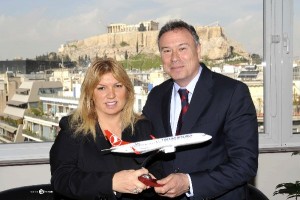 Attica Governor Yiannis Sgouros and the general director of Turkish Airlines in Athens, Gulay Ozturk, have decided to join forces and focus on the tourism cooperation between Greece and Turkey.

During a meeting held recently in Athens, Ms. Ozturk briefed the governor in regards of the airline’s initiatives to boost tourism in Greece. Both sides agreed to outline an initial programming that would include the coding of specific actions to promote the tourism product of Attica.

“This requires the design of a specific framework within which joint actions and initiatives will be integrated,” Mr. Sgouros said after the meeting. He added that the district would actively support any effort that aims to boost tourism in Attica.

Turkish Airlines has been named “Best Airline in Europe” for 2011 and 2012 by Skytrax and flies to over 215 destinations. The airline now features the fifth largest route network in the world and flies to over 95 countries.

“Turkish Airlines can be the bridge connecting these destinations to the city of Athens, thus contributing to the increase in the city’s tourism traffic,” Ms. Ozturk noted and underlined the company’s significant increase in flight operations in Greece.

“The aim is to establish Athens as a city break destination,” she said.