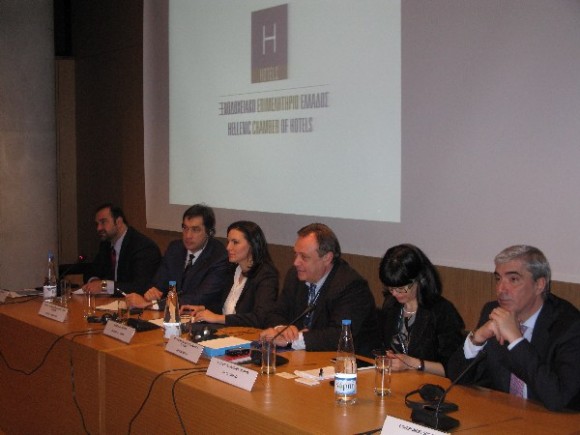 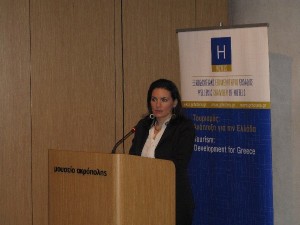 At the Greek-Russian Forum for tourism, Greek Tourism Minister Olga Kefalogianni analyzed the dynamics of the Russian tourist market for Greek tourism and highlighted the initiatives taken by the ministry to boost Russian arrivals.

Greece welcomed 875,000 Russian tourists last year with the average expenditure per visit at 1,085 euros but strict visa regulations still remain an obstacle for a major increase of arrivals, it was underlined at the Greek-Russian Forum for tourism held today, Sunday, 10 February, at the Acropolis Museum in Athens.

The forum, held by the Hellenic Chamber of Hotels and the Greek Tourism Ministry, hosted 48 leading Russian tour operators and aimed to discuss ways of cooperation to attract a larger share of tourists from the Russian market to Greece. 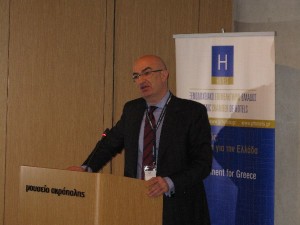 “Russia’s economic development and the consequent desire for travel and holidays is expected to grow even more and we hope that Greece and Athens will be able to claim a larger share of the pie,” the president of the Hellenic Chamber of Hotels, Yiorgos Tsakiris, said.

According to data from the Bank of Greece, in 2012 Russian overnights reached 9.6 million and each Russian tourist had an average stay of 11 nights and average daily spending of 98 euros.

However, Greece could do better if the visa procedure for Russians was facilitated.

According to the chief director of the Association of Tour Operators of Russia (ATOR), Mariam Lomidze, Spain has been “way ahead of Greece” ever since the country established the issuance of multiple-entry visas for Russian citizens.

The Greek Government has undertaken initiatives to facilitate the arrival of Russian tourists to Greece such as adding extra visa centers in Russian cities.

However, obstacles still remain for Russian citizens who are opting for destinations that have either lesser strict or no visa requirements for non-Schengen citizens. Turkey for example welcomed 2.5 million Russian tourists last year.

According to Deputy Foreign Minister Dimitris Kourkoulas, Greece and Russia are in talks to sign a joint declaration to strengthen cooperation on movement issues that will include the issue of long-term multiple-entry visas for Russian citizens.

Also, during its EU Presidency in the first half of 2014, Greece plans to promote a waiver of the visa obligation for Russian nationals that have a biometric passport, according to an announcement made last December.