Early bookings to Chalkidiki have already reached a double-digit figure mainly from Russia and the Balkan countries, hoteliers in the region said during the Chalkidiki Hotel Association’s general meeting, held last Sunday, 3 February.

Hoteliers agreed that 2013 would be a better year for the region’s tourism, than the previous three (since the crisis began in Greece), as long as no “dramatic” political, economic or social developments take place in Greece. 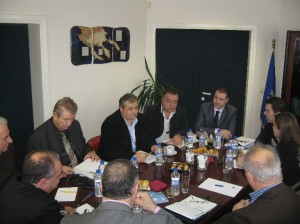 The hotel association will cooperate once again this year with the Chalkidiki Tourism Organization and follow an action plan similar to last year’s to boost arrivals in the region. This year’s actions will include cooperation with overseas public relations offices, the promotion of green tourism in Chalkidiki, press trips and fam trips and a strong online presence.

Present at the general meeting was GNTO Secretary General Panos Livadas who analyzed the organization’s policy that will focus this year on supervising the level of Greek tourism services offered to visitors.