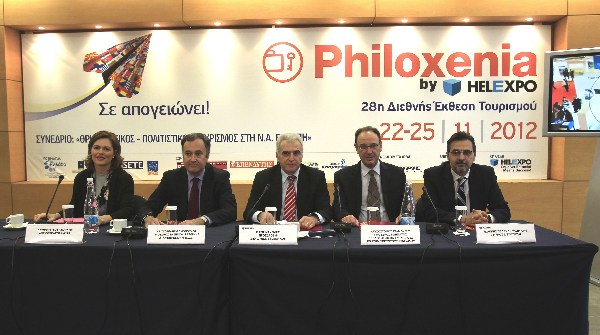 “The 28th International Tourism Exhibition Philoxenia will play a key role in attracting more tourists to our country, even from new foreign markets, which, until now, were not familiar with the Greek tourism product,” President and CEO of HELEXPO, Paris Mavridis, said yesterday, Tuesday, 20 November, at a press conference in Thessaloniki two days prior to the exhibition. 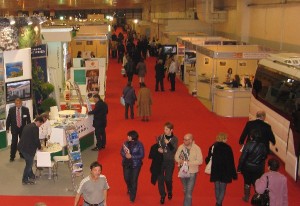 The aim is to highlight and establish the exhibition as the biggest tourism event in the Balkans and the wider region of Southeastern Europe.

According to the president of the Thessaloniki Hotels Association, Aristotelis Thomopoulos, bookings from the UK market are on the up for 2013 while the messages from the German market are also encouraging.

While speaking in regards to Greek tourism’s new target markets -Russia, India, China and Brazil- he pointed out that until now, only Russia has received a methodical approach by Greek tourism professionals.

In regards to tourism in Thessaloniki, Mr. Thomopoulos said the drop in domestic tourism has hurt the Northern Greek city’s hotel industry and predicted a 10 percent drop in overnights this year. He added that a significant decline in visitors from Israel has been recorded while visits from Turkish tourists have also slowed down.

On her part, Despina Amarantidou, vice president of the Hellenic Association of Travel & Tourist Agencies (HATTA), stressed that conference tourism in Greece saw a bad year in 2012 compared to last year in regards to attracting major international conferences.

“This is because Athens failed this year to host as many conferences as it had in the past while Thessaloniki is seeing an upward trend,” she said.

Philoxenia 2012 will take place 22-25 November (22-23/11 – only for trade visitors, 24-25/11 – trade visitors and the public) at the Thessaloniki International Exhibition Center under the organization of Helexpo and conference organizer ARTION.

In regards to parallel events, this year’s highlight is the international conference “Religious and Cultural Tourism in Southeast Europe, Models of Development – Cooperation Opportunities.” The conference will focus on the prospects for developing synergies in the field of pilgrimage-cultural journeys, which during the last decades has become popular among millions of visitors worldwide.

GTP will see you in Philoxenia!

Philoxenia 2012 Will Have “Greek Breakfast”