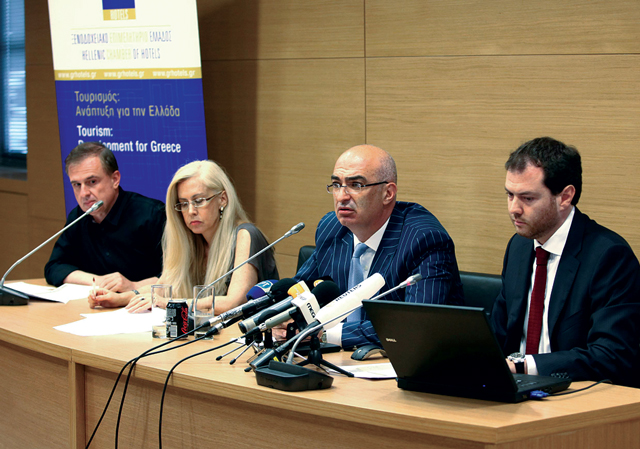 Studies on medical tourism and senior tourism will be released in September by the Institute for Tourism Research and Forecasts (ITEP), the president of the Hellenic Chamber of Hotels, Yiorgos Tsakiris (third from left), told the press.

“The Greek tourism market was significantly affected by the political uncertainty that intensified after the (first) elections of 6 May,” the president of the Hellenic Chamber of Hotels, Yiorgos Tsakiris, said at a recent press conference.

However, Greek tourism “bounced back” after the country’s second round of national elections on 17 June. Hoteliers told the press that they now expected a 10 percent drop in this year’s bookings against previous concerns of a 30 percent decline.

Referring to an improvement in bookings based on data provided by online travel company Expedia, Mr. Tsakiris underlined that once negative developments in the Greek political and economic scene were lifted, many tourists finalized plans to travel to Greece.

However, hoteliers have noted that despite the rebound in bookings, the year would close with losses.

The Institute for Tourism Research and Forecasts (ITEP) has estimated a 15-20 percent decline of hotel revenue year-on-year; a 10 percent reduction in hotel occupancy; and an eight to nine percent drop in prices for 2012.

During the first quarter of the year, overnight stays in Greek hotels dropped by some 25 percent, according to data submitted to ITEP by the presidents of local hotel associations in the country.

Overnights in April and May were said to be even more disappointing than the entire first quarter since a 35 percent decline was recorded.

“This is attributed to the low number of Greeks planning their summer vacations,” Mr. Tsakiris clarified. He added that the year would be negative for hotels that rely mainly on the domestic market.