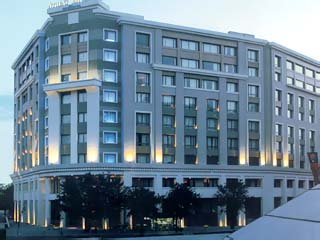 On 31 May the five-star Classical Athens Imperial hotel of the Daskalantonakis Group, located in Metaxourgio, central Athens, ceased operations due to low bookings as a result of the degradation of Athens center. “The announcement of the closure of yet another hotel in Athens, the five-star Athens Imperial, member of the Athens-Attica Hotel Association and a decoration for Karaiskaki Square, is a deeply unfortunate event,” the Athens-Attica Hotel Association said in an announcement.

“At the beginning of the year I referred to a particularly difficult tourism season but now, based on the rate bookings are moving in Athens, I will now refer to a collapse,” the president of the Hellenic Federation of Hoteliers, Yiannis Retsos, told tourism journalists recently.

International arrivals to Athens showed a 13 percent decline during the January-May 2012 period while in May alone arrivals to the Greek capital were down by 17 percent, recent data showed.

According to the data, for the first four months of the year the hotel occupancy in Athens fell below 50 percent to 46.9 percent while competing European capital cities were well above 60 percent.

The federation’s president said some 25 hotels in the city center closed down over the past three years due to low bookings from rising crime and illegal immigration. Other hotels suspended operations or became seasonal.

In a recent announcement, the Athens-Attica Hotel Association said the historical and commercial center of the Greek capital has been systematically downgraded and ignored as the state has allowed illegal immigration, crime and lawlessness in any form to
evolve within.

“The relentless defamation of the country and of the destination contributed to the constant decline in demand, to the cancellation of bookings, to the reduction in occupancy, to the drop in revenue (down 40 to 55 percent) and of course to the inability of units to keep up with operating expenses and fixed obligations,” the association added.