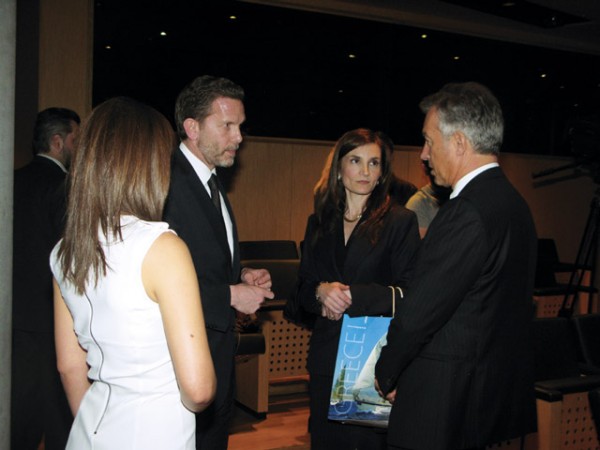 Culture and Tourism Minister Pavlos Yeroulanos (left) and SETE’s President Andreas Andreadis discuss tourism issues at a recent event in Athens. Over the past few months, Mr. Yeroulanos was in constant consultations with tourism professionals on the creation of the “Marketing Greece” company, which is expected to be a useful tool for the country.

The Greek Government approved an amendment tabled in Parliament last month that opened the way for the establishment of a public-private marketing company for Greek tourism. The amendment was tabled by Culture and Tourism Minister Pavlos Yeroulanos and specifically involved a long-awaited venture between the Greek public sector and the Association of Greek Tourism Enterprises (SETE).

For the past 60 years, the country’s promotion abroad was carried out exclusively by the Greek National Tourism Organization (GNTO) with its own funds.

However, the private sector (tourism professionals) had criticized the efficiency of state advertising for Greek tourism and particularly SETE had its eye on the establishment of a marketing company that would market a brand name for Greek tourism based on private-public sector partnership.

Mr. Andreadis explained to the media that the new company would mainly focus on the branding of Greek tourism and the planning of special promotional actions. “This will be a great challenge for the private sector as it is the first time it will be involved in the promotion of the national tourism product.”

“The GNTO will continue to deal with the country’s national participation in international tourism exhibitions and Greece’s advertising campaign,” SETE’s president said.

Through “Marketing Greece” a network of public relations offices are planned to develop in five markets of major importance for Greek tourism, particularly in the UK, Germany, France, USA and Russia.

In time, the company would spread to other markets, mainly China, Italy, the Netherlands, Turkey and Scandinavia.

According to press reports, the Hellenic Chamber of Hotels is not participating in Marketing Greece, although it represents some 9,700 hotels across the country and is the official institutional consultant of the state.

Mr. Yeroulanos had informed journalists recently that the chamber could eventually participate in the company at a later stage through the purchase of market shares.

However, this is not the case for Greek regions as there have been no thoughts for their inclusion in
the company. Tourism journalists have mentioned that this “may cause a contrast with the marketing company’s strategy” as the regions would most likely continue to approach foreign markets with their own tourism promotion campaigns.

“Greece -including its regions- must agree on a (common) brand logo that would last for the next 10-20 years,” SETE’s president told the press.

The Hellenic Association of Travel and Tourist Agencies (HATTA) last month referred to the planned public-private sector marketing company as a “positive move as long as the company does not replace the free market by selling and promoting or marketing products and services.”

Marketing Greece’s initial budget is said to be at six million euros, out of which the public sector would contribute two million euros while the remaining four will be contributed from private companies. The company’s main objective is to achieve an estimated advertising value of 100 million euros by its third year of operation.