Greece’s participation at WTM 2011 overshadowed by political instability back home. 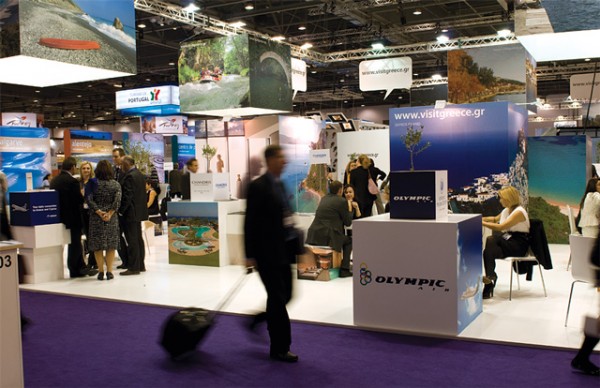 “The world’s governments should do more to support travel and tourism,” World Travel Market’s Chairman Fiona Jeffery told the industry during her opening speech at the tourism fair at ExCel in London, UK, held this year 7-10 November.

According to Ms. Jeffery, the tourism industry provided more than 235 million jobs last year, a figure that represented eight percent of international employment.

She also highlighted its potential for further growth with international tourist arrivals forecast to reach 1.8 billion by 2030. 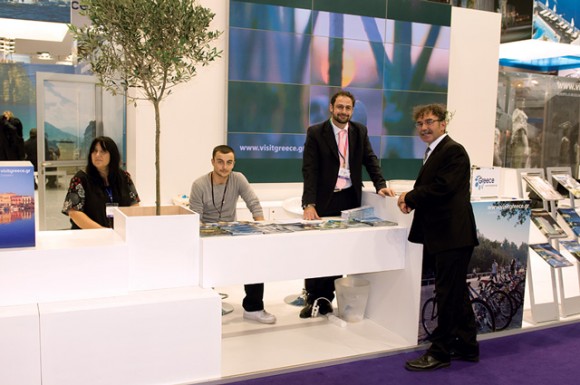 Kyriakos Liolios, information officer for Greek National Tourism Organization in London, was on call at the GNTO’s pavilion at the WTM. The pavilion included 24 Greek exhibitors and was said to have attracted considerable interest.

WTM’s chairman highlighted the damage actively done to the travel and tourism industry by the world’s Governments, citing the UK Government’s planned increase in Air Passenger Duty, the fourth in five years, as well as the US Government’s proposed $25 billion raid on airline passengers in the US.

The report also showed that almost four out of 10 (38 percent) UK consumers did not go on a holiday in 2011 and concluded “tax increases are pricing people out of the previously sacrosanct holiday.” 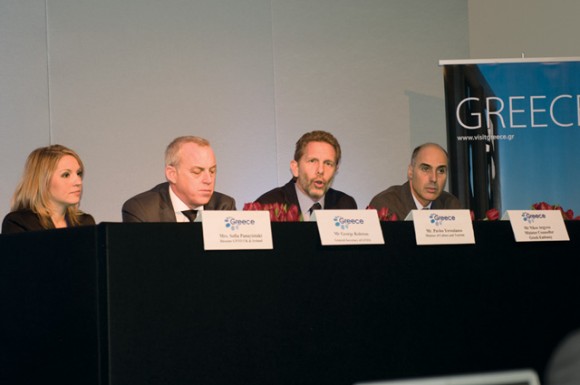 “We are entering a new era and it is very good that most parties will take on the burden of changes to be made in Greece,” Culture and Tourism Minister Pavlos Yeroulanos said during his press conference at the WTM when questioned in regards to political developments taking place in Greece at the time.

Greece’s presence at this year’s WTM fair was characterized as “low key” due to the political instability in the country at the time.

During his press conference to Greek and foreign journalists, Culture and Tourism Minister Pavlos Yeroulanos made no prediction in regards to tourism traffic from the UK market in 2012 to Greece.

When asked by a journalist if the economic and political crisis in Greece would have any affect on the intentions of UK travelers to travel to the country, Mr. Yeroulanos noted that “no evidence suggests such a thing.” He did however add “this year we hope to break the record in arrivals and income.”

The culture and tourism minister said the ministry intends to promote, on a European Union level and in collaboration with other common destinations (such as Turkey and Egypt), packages to remote destinations such as China, India etc. 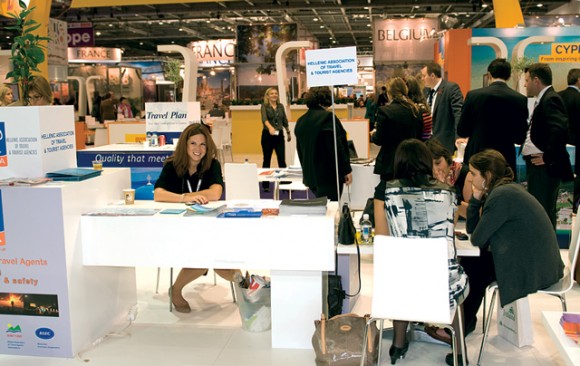 The Hellenic Association of Travel and Tourist Agencies’ (HATTA) representative Fryni Alexiou. This year HATTA participated in the WTM Associations’ Pavilion, a designated area where key association partners could arrange meetings with clients away from the hustle and bustle of the WTM floor. HATTA’s list of members was distributed at the stand.

He also said negotiations are taking place with the Greek Finance Ministry to secure more funds for the advertising of Greek tourism, more than the 12 million euros provided this year.

In addition, during the press conference, the possibility of re-advertising via traditional methods to foreign markets was not excluded. For the last two years, Greek tourism’s advertising has primarily been done via the Internet.

According to recent press reports, there has been a slight decrease in bookings from the UK to Greece for the 2012 season when compared to booking made during the same period last year for this year.

Andreas Andreadis, president of the Association of Greek Tourism Enterprises (SETE), told the press that major tour operators such as Thomson has referred to a nine percent decrease of bookings to Greece while smaller tour operators have also referred to slightly negative rates.

Mr. Andreadis had added that two weeks prior to WTM, the flow of bookings to Greece for some tour operators was deteriorating up to 75 percent, a development that is linked to the uncertainty and instability that existed in the country at the time. 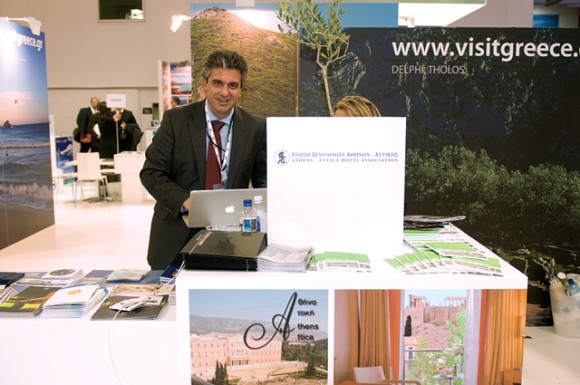 However, SETE’s president said it was too soon to come to conclusions for developments for next season.

The association’s president also noted that next year’s tourism to Greece would be influenced mainly by a possible global economic recession and also by domestic issues the country is facing.

“The new government should immediately shield Greek tourism with the proposals made recently by SETE,” Mr. Andreadis told the press.

Limited Participation At This Year’s Philoxenia