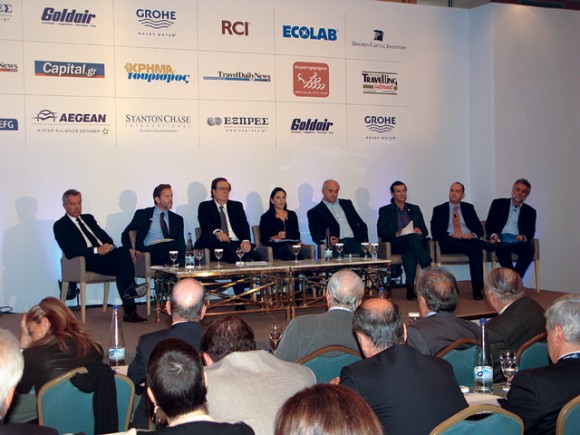 For the first time a tourism minister, in this case Pavlos Yeroulanos (second to left), sat at the same table with representatives of all opposition parties in an attempt to agree on a basis of Greek tourism development acceptable to all. Mr. Yeroulanos acknowledged that each party approaches tourism differently and said he was open to suggestions but he also underlined that the ministry and some of the political parties were “not at all on the same wavelength in regards to the philosophy of tourism.”

Although the Association of Greek Tourism Enterprises’ (SETE) tenth annual tourism and development conference was slightly overshadowed by Greek political instability and uncertainty last month it will remain in history as a conference first of its kind that took a step further and held a dialogue between the Government and all opposition parties.

The first session of SETE’s conference, entitled “Tourism: A matter of national importance,” focused on the proposed joint strategy of the Culture and Tourism Ministry and SETE for Greek tourism’s development for the 2011-2021 decade.

During his presentation, Culture and Tourism Minister Pavlos Yeroulanos told opposition party representatives that in the next 10 years the Government’s primary targets are for Greece to be included within the first 10 tourism destinations in the world; for the direct and indirect tourism Gross Value Added (GDP-taxes + subsidies) to reach 50 billion euros; and for jobs in the tourism industry to reach one million. 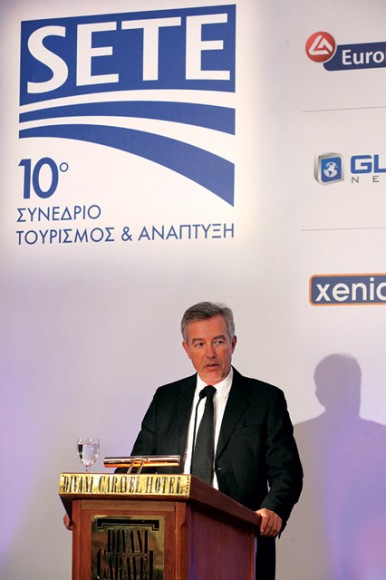 SETE’s president, Andreas Andreadis, told the audience that the first picture for 2012 is one of a very uncertain year, which will be affected by a possible new international economic recession, the tourism revival of the North African destinations and especially Greece’s (problematic) image abroad.

Following the minister’s presentation, representatives of main opposition New Democracy, the communist KKE party, the right-wing LAOS party, the leftist SYRIZA party, the Democratic Alliance party and the Democratic Left party took the floor and in general agreed on the objectives and parameters of the Culture and Tourism Ministry’s proposed tourism strategy. However, they made different approaches or took different positions on specific issues.

One of the main issues discussed by all party representatives was in regards to the necessity of the announced marketing company based on a public-private sector partnership.

Some opposition party representatives debated that such a public-private sector cooperation was “pointless” since the Greek National Tourism Organization has not fully exhausted all of its possibilities.

At that point, George Drakopoulos, SETE’s general director, advised the opposition party representatives not to “jump to conclusions” as they do not know exactly what will be the marketing company’s agenda.

The announced marketing company plans to form a brand name for Greek tourism and then promote it abroad to specific markets via targeted actions.

Another issue brought up and criticized by some parties was the recent VAT hike on food catering services (that include restaurant services in Greek hotels) from 13 to 23 percent and Mr. Yeroulanos suggested them not to forget that the tax measure was “ephemeral.”

The reduction of the VAT is included in SETE’s proposal for the tourism sector’s development up to 2021 so Greece could see 24.6 million arrivals per year in 10 years time.

SETE’s president Andreas Andreadis told the audience that specific direct measures must be adopted and he outlined the directions and priorities of the association’s 10-year strategic plan. 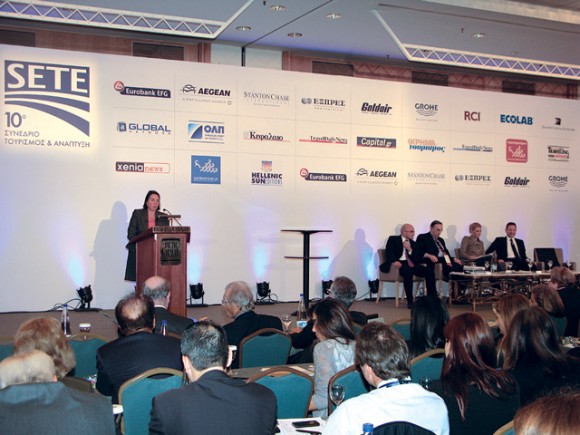 “To talk about tourism today is like resetting the chairs on the Titanic,” according to Miranda Xafa, member of advisory board at IJ Partners and a former member of the IMF’s executive board. Ms. Xafa suggested for Greece to follow the example of the U.S. and establish a sunset legislative committee in order to “clean up” the public sector. Such a committee identifies and eliminates waste, duplication, and inefficiency in government agencies and questions their need.

The association’s proposal also included the establishment of an independent Tourism Ministry, the cutting of the airport tax charged by Athens International Airport by 50 percent, public-private sector cooperation for the upgrading of tourism education, the full lifting of cabotage restrictions and the construction of 30 more marinas.

“This year’s results for Greek tourism are not an excuse for celebrations and triumphalisms,” he said.

According to figures released recently by the Bank of Greece, this year tourism has recorded a 10 percent increase in both revenue and international arrivals.

Mr. Andreadis said the targets set last March had been reached as international arrivals this year saw “a record high of some 16.5 million tourists.”

“The prospects of domestic tourism for 2012 appear negative,” he said.

The conference’s second session entitled “Greek Tourism in a broader international competitive environment,” kicked off with the presentation of the study “Greece 10 Years Ahead” conducted by the Mckinsey and Company consulting firm. 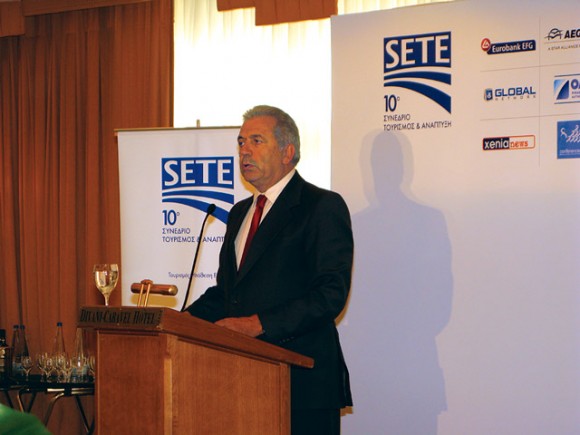 The study, also known as “the Mckinsey study,” was presented to Greece in September and aims to define a new growth model and strategy for economic development in Greece in the next five to 10 years.

“Greece 10 Years Ahead” focuses on the five largest (in terms of gross value added) production sectors of the economy that have significant potential to fuel Greece’s economic growth in the coming years: tourism, retailing, energy, industry and agriculture.

According to the study, by 2021 the direct and indirect contribution of Greek tourism to the Greek GDP could increase (vs. 27 billion euros in 2010) by some 18 billion euros (45 billion euros) annually through a series of initiatives and investments while employment could increase by approximately 220,000 new job positions.

Analysts had commented in the study that Greece lacks an effective market-driven organization for managing and promoting its tourism product abroad.

The Mckinsey study was in the center of attention of the second session and was commented on by all panelists.

Government Called To Care About Shipping